Comb
The comb is the term for the main body of the instrument, which contains the air chambers that cover the reeds. The term comb originates from the similarities between simple harmonicas and a hair comb. Harmonica combs were traditionally made from wood, but now are usually made from plastic (ABS) or metal (including titanium for very high-end instruments). Some modern and experimental comb designs are complex in the way that they direct the air.
Comb material was assumed to have an effect on the tone of the harp. While the comb material does have a slight influence over the sound of the harmonica, the main advantage of a particular comb material over another one is its durability. In particular, a wooden comb can absorb moisture from the player's breath and contact with the tongue. This causes the comb to expand slightly, making the instrument uncomfortable to play. Various types of wood and treatments have been devised to reduce the degree of this problem.
An even more serious problem with wood combs, especially in chromatic harmonicas (with their thin dividers between chambers) is that the combs shrink over time. Comb shrinkage can lead to cracks in the combs due to the combs being held immobile by nails, resulting in disabling leakage. Much effort is devoted by serious players to restoring wood combs and sealing leaks. Some players used to soak wooden-combed harmonicas (diatonics, without windsavers) in water to cause a slight expansion, which they intended to make the seal between the comb, reed plates and covers more airtight. Modern wooden-combed harmonicas are less prone to swelling and contracting. Players still dip harmonicas in water for the way it affects tone and ease of bending notes. 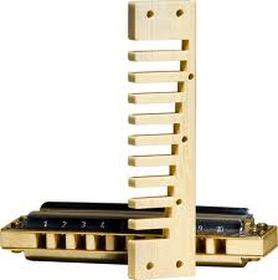 Reed-plate
Reed-plate is the term for a grouping of several reeds in a single housing. The reeds are usually made of brass, but steel, aluminium and plastic are occasionally used. Individual reeds are usually riveted to the reed-plate, but they may also be welded or screwed in place. Reeds fixed on the inside (within the comb's air chamber) of the reed-plate respond to blowing, while those on the outside respond to suction.
Most harmonicas are constructed with the reed-plates screwed or bolted to the comb or each other. A few brands still use the traditional method of nailing the reed-plates to the comb. Some experimental and rare harmonicas also have had the reed-plates held in place by tension, such as the WWII era all-American models. If the plates are bolted to the comb, the reed plates can be replaced individually. This is useful because the reeds eventually go out of tune through normal use, and certain notes of the scale can fail more quickly than others.
A notable exception to the traditional reed-plate design is the all-plastic harmonicas designed by Finn Magnus in the 1950s, where the reed and reed-plate were molded out of a single piece of plastic. The Magnus design had the reeds, reed-plates and comb made of plastic and either molded or permanently glued together. 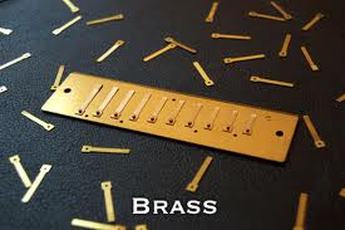 Cover plates
Cover plates cover the reed-plates and are usually made of metal, though wood and plastic have also been used. The choice of these is personal—because they project sound, they determine the tonal quality of the harmonica. There are two types of cover plates: traditional open designs of stamped metal or plastic, which are simply there to be held—and enclosed designs (such as the Hohner Meisterklasse and Super 64, Suzuki Promaster and SCX), which offer a louder tonal quality. From these two basic types, a few modern designs have been created, such as the Hohner CBH-2016 chromatic and the Suzuki Overdrive diatonic, which have complex covers that allow for specific functions not usually available in the traditional design. It was not unusual in the late 19th and early 20th centuries to see harmonicas with special features on the covers, such as bells, which could be rung by pushing a button. 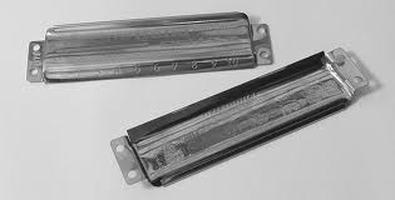 Windsavers
Windsavers are one-way valves made from thin strips of plastic, knit paper, leather or teflon glued onto the reed-plate. They are typically found in chromatic harmonicas, chord harmonicas and many octave-tuned harmonicas. Windsavers are used when two reeds share a cell and leakage through the non-playing reed would be significant. For example, when a draw note is played, the valve on the blow reed-slot is sucked shut, preventing air from leaking through the inactive blow reed. An exception to this is the recent Hohner XB-40 where valves are placed not to isolate single reeds but rather to isolate entire chambers from being active. 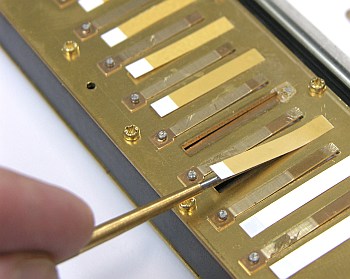 Mouthpiece
The mouthpiece is placed between the air chambers of the instrument and the player's mouth. This can be integral with the comb (the diatonic harmonicas, the Hohner Chrometta), part of the cover (as in Hohner's CX-12), or may be a separate unit entirely, secured by screws, which is typical of chromatics. In many harmonicas, the mouthpiece is purely an ergonomic aid designed to make playing more comfortable. However, in the traditional slider-based chromatic harmonica it is essential to the functioning of the instrument because it provides a groove for the slide.